Over the coming days, I am discussing some of the higher profile upcoming arbitration cases. So far, we’ve previewed Josh Bell, Cody Bellinger, Francisco Lindor, Trevor Bauer, Mike Clevinger and Jonathan Villar. For these pieces, I rely partly on my arbitration model developed exclusively for MLB Trade Rumors, but will also break out some interesting comparables and determine where the model might be wrong. 2020 projections are available right here.

George Springer enters his final year of arbitration eligibility after playing out a two-year, $24MM deal that covered his 2018-19 seasons. Springer only played in 122 games last season due to a hamstring strain, but he still managed to belt 39 home runs and knock in 96 runs despite consistently batting in the leadoff spot — all while hitting .292. While being limited to 556 plate appearances could hurt an otherwise strong arbitration case, his impressive counting stats should get him a hefty raise. 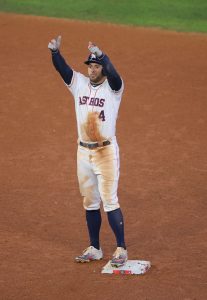