It would be an understatement to say the Cubs’ Jason Heyward has had an eventful career in professional baseball. Heyward was the 14th pick of the Braves in the 2007 draft, and the Georgia-raised outfielder’s star continued to rise thereafter. As a prospect, Heyward topped out as Baseball America’s No. 1 overall farmhand after the 2009 season.

“Even if he opens 2010 at Triple-A Gwinnett, Heyward will be starting in Atlanta at some point during the year, and he has all the ability to emerge as one of the game’s premier players,” BA wrote then. 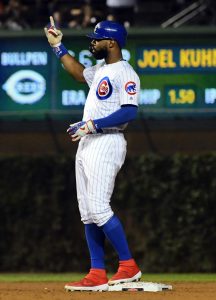 The towering Heyward did not start 2010 in the minors, though, instead beginning as the Braves’ top right fielder. And he made an enormous impact from the get-go, smashing a first-inning, three-run homer off Cubs righty Carlos Zambrano in his initial at-bat. The Braves went on to win that game and 90 more en route to a wild-card berth, owing in no small part to a 4.6-fWAR Heyward effort in which he batted .277/.393/.456 in 623 plate…

Read “MLBTR Poll: Has Jason Heyward Been A Disappointment?” at MLB Trade Rumors